WASD to move, QE to rotate

Mouse shoots your main cannon. Shootings costs glue, unless you fire less than once per second.

Space switches you in or from Glue Time, which slows time and lets you assimilate enemy balls when you touch them.

To be able to go into Glue Time you need Glue at or above capacity.

White ball (cueball) is you, you shoot your main cannon from it, and it's game over if it is destroyed.

1-ball has no special functions, except being cheap (in glue capacity value).

3-ball has high speed. Your ship's speed and rotation speed depends on ratio of mass/speed of all it's balls, so 3-ball can make you faster

4-ball is your armor. It has high hp, and extra damage resistance.

5-ball has homing missile launcher. It's damage is weaker than one of 2-ball, but it can get you from any angle.

6-ball is a magnet for dropped glue. Any of your balls can absorb glue, btw, but in enemy ship only 6-balls can do it. Which makes them nearly as annoying s 5-es.

7-ball buffs all nearby allies in short distance. Bonus is around 50% to damage resistance and firing speed for nearest balls, and drops with the square of distance. It sacks up to 300% total.

8-ball is a boss. Nearly indestructible, and gives big 7-like buff. Only way to defeat it is to destroy all it's other parts and glue it. 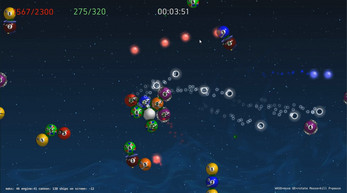 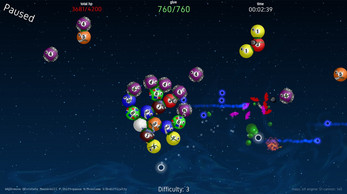 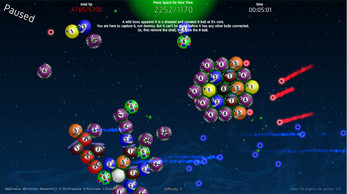